A follow up on (Re)Thinking borders in Central America, the Caribbean, and the Gulf Coast of the Southern United States: Separation, Circulation, and Identification at an American crossroads

The Texas, Mexico, and Caribbean centers of the Institut des Amériques put together a collaborative series of webinars, which took place on Thursdays, October 21, 28, and November 4, 2021. This three-chapter bilingual event saw eight scholars from the region initiate a conversation on the theme of borders and transnational circulations within a space that comprises the Central American isthmus, the Caribbean, and the Gulf Coast of the Southern United States. 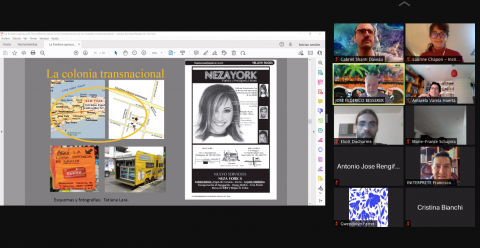 The coordinators of the three IdA centers responsible for organizing this event are very happy about the event’s successful turnout, as well as the pertinent discussion that the papers generated during the Q&As. They would like to like to thank warmly the speakers and translators for their contribution, as well as their welcoming institutions (Texas Global, CEMCA, Funglode) for their support in putting together the event.

Session 1. Drawing Borders : A Region at the Crossroads between North and South?

The first session which took place on October 21, 2021, focused on the Caribbean region. Rosajida Veldez, an economist from the Dominican Republic, discussed the major economic dynamics that can be observed within the Caribbean basin. At a macro-economic level, she insisted on the loss of attractiveness of Caribbean nations, the economies of which still rely massively upon the United States. While she reminded the audience of a geopolitical context that polarizes itself according to East and West (notably with the growing influence of China in the region), she asserted that it is the North-South dynamic, especially towards the United States, that prevails nonetheless. Remittances from Caribbeans living in the USA thus contribute a lot to insular economies.

Cédric Audebert, a geographer at the Université des Antilles, then gave a presentation on transnational circulations and the Caribbean migratory system. He first questioned the phrase “American Mediterranean” which has been applied to the Caribbean space, an interface region which is the locus of intense regional and international circulations. Audebert thus preferred to focus his attention on the increased forms of fragmentation that occur at multiple scales, in a region that regroups spatial entities with diverse economic, linguistic and institutional profiles. He insisted on the centrality of Miami within this Central American and Caribbean system, a crossroads-city whose status as a growing metropolis is fueled by transnational migratory flows. Audebert underlined the articulation between global and local dynamics at work in these urban spaces. On the one hand, these dynamics lead to phenomena of segregation as well as resource polarization in spaces that are better connected to global networks. On the other hand, they contribute to a process of transnationalization of borders, and make for the emergence of new pan-cultural spaces that are the sign of hybridization and acculturation.

Finally, Eddy Tejeda, a lawyer and scholar with FLACSO-RD, presented his work on labor-related migration from Haiti to the Dominican Republic. He reminded the audience that there also occur migrations that are internal to the Caribbean basin. He showed how the change in Dominican migratory politics, notably after 2004, contributed to greater precarity for Haitian migrants, who account for an indispensable workforce in many economic sectors in the Dominican Republic (construction and domestic sectors in particular). Haitian laborers live in dire conditions and are excluded from programs of social protection and labor law. Lately, he explained that the Dominican government has been considering the issue under a new light, though. Migratory laws and regulations have thus transformed into a fundamental social justice issue.

Session 2. Borders and (Hyper)Mobility at an American Crossroads: Toward New Territories?

During the second instalment in the series, on October 28, 2021, three scholars from the region presented: the sociologist Amarela Varela Huerta (UACM), the anthropologist Federico Bessere (UAM-I), and the geographer Laurent Faret (Université de Paris). This session’s goal was to look at transborder relations. This led speakers to address multiple questions, such as mobility, border epistemology, and methodology in the context of the pandemic. The notion of mobility is one that has gained traction in the social sciences over the past thirty years. The so-called “mobility turn” lays emphasis on the fact that social life, power relations, as well as territories, are built and reproduced increasingly around and through movement. Nevertheless, the presentations looked beyond a strict understanding of mobility, and also focused on epistemological and methodological questionings. What goes into producing an ethnography of migration in the time of a world pandemic? How to account for the lived experiences of migrants without proceeding to what A. Varela Huerta calls “scientific extractivism”? How to study a phenomenon of people in movement, who are often invisible or have been made invisible?

Amarela Varela Huerta opened the session with a presentation on “Immobility in the Americas”. In her paper, she addressed issues of method that were delineated in an ongoing international research project initiated in 2020, that brings together 45 researchers from 19 countries (including herself), and that pays attention to the migratory question in the context of Covid-19, as well as the border closures that have been occurring as a result. The goals of this project are to find ways to proceed with ethnographic research during the pandemic, for example through digital ethnography, and to keep producing counter-narratives through these digital means. These can allow researchers to go against dominant media and political discourses, to uphold a principle of migratory justice, and ultimately to produce digital archives on these questions. This project bears a strong epistemological dimension and looks at ways in which to account for migrant voices by adopting a “situated” perspective. As a form of action-research, this project also grants importance to a researcher’s own discursive productions.

In a presentation entitled “Hurried Borders: a reflection on the (re)bordering of contemporary cities”, Federico Besserer also laid emphasis on the epistemological and research production issues at stake in times of pandemic. He thus calls upon researchers to adopt an auto-ethnographic method for the study of (im)mobilities that result from the sanitary crisis, as well as from new modes of living. In this respect, he uses Foucault’s “hurried city” to describe new forms of self-enclosure and self-discipline that have emerged during the pandemic and that beget new borders. He calls this process “re-bordering” and explains that it is also visible in the establishment of new migrant camps because of the pandemic.

Laurent Faret closed this second session with a paper entitled “Borderspace and restricted mobilities between Central and North Americas”, in which he attempted to redefine the migratory paths followed by migrants that face obstacles. Many of them are forced to adopt new modes of living as a result of settling down locally, mid-migration so to speak. Laurent Faret argues that this is an invitation to rethink the mobility-immobility dialectic, by considering migratory paths as they are effectively followed through or interrupted.

Session 3 : Drawing the line : representing identities from the borders of the Americas.

The third and final session in the seminar on borders in the pivotal zone of the Americas brought to the table a sociologist from the Colegio de la Frontera Sur in the Chiapas province, Fernando Limón Aguirre, and an anthropologist of religions from the University of Texas at Austin, Brent Crosson. This third instalment initiated an ontological turn, as the speakers focused on stakes of representation and identification on borderlands. In this approach, they relied on collective as well as individual stories to better interrogate transborder experiences, thus bringing in a narrative supplement to the studies from the first two sessions.

Relying on his long experience studying the Chuj and Q’anjob’al Mayan people, Fernando Limón Aguirre upheld the idea that all borders are places of junction and mixing, rather than simply of separation. Pr. Limón offers the concept of “transborder” (“transfrontera”) as a notional tool to explain the reality of territories that are cut across by national divisions that are irrelevant at native-American – and even more at geological – scales. While these peoples and their territories are stigmatized for their transgressive relationship to national or market borders, Fernando Limón brilliantly depicts this dynamic of the in-between, which constitutes a phenomenal resistance to the line that separates nations, and which has come to define the indigenous populations living on the border between Mexico and Guatemala. In his demonstration, he notably uses the concepts of “mestizo” and “nepantla” developed by Chicana poet Gloria Anzaldua; these allow him to reach an understanding of borderlands as a market of hybridization.

In the second half of this session, Brent Crosson presented a paper at the junction of social sciences and creative writing, reading first an essay on the maritime border that separates Venezuela and Trinidad, and then a poem he wrote himself, entitled “The Traffic in Birds”. In this two-step presentation, Brent Crosson illustrated how this porous space of demarcation includes aspects that go beyond human mobility. He thus considers other scales. First, the flow of symbolic goods, like these carved birdwings that, in his poem, the mother in transit towards Trinidad carries with her. Also, this rhythm of geological proportion, that follows the movements of water and sediment in the Orinoco Delta, where the border between Venezuela and Trinidad is situated. Crosson comments: “The same river has served as indigenous corridor and trade route, bringing not just the silt that formed Southern Trinidad’s landmass in layers of sedimentary rock, but a continual flow of trade and transmigration between South America and the southernmost Caribbean Island.” The poem, with its exposition of voices from Venezuela transitioning to Trinidad, also offers a counterpoint to the often sensationalist representations that, in the Trinidadian press, are given of migrants from the continent. Besides, Brent Crosson pays close attention to some signifiers shared on both sides of this maritime limit, such as the term “Spanish”. In his poetics, the border refracts shared signs, brings in a supplement of ambiguity to common significations, to the word “Spanish”, but in particular to the Ibis bird, the symbolical uses of which proliferate through his text.

(Re)Thinking borders in Central America, the Caribbean, and the Gulf Coast of the Southern United States 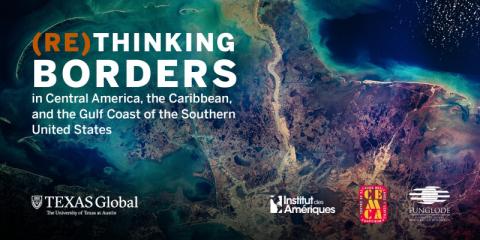 (Re)Thinking borders in Central America, the Caribbean, and the Gulf Coast of the Southern United States: Separation, Circulation, and Identification at an American crossroads.

Join scholars from around the world for an interactive three-part virtual series as we explore questions of construction and deconstruction of material and symbolical borders, in the pivotal space that links the United States, Central America, and the Caribbean. This unusual grouping will make for a unique exploration of the phenomena of border fragmentation and hybridity. Calling upon a broad theoretical understanding of borders, the seminar also invites us to think of this American crossroads as a space that is at once perceived, conceived, and lived, through a variety of cuts and junctions.

The presentations will be given in English and Spanish, with an option for direct translation offered to everyone in attendance. Registration to each event is mandatory to receive the login information. Please register here.

Session 3. Drawing the Line: Representing Identities from the Borders of the Americas