Elites in Brazil and South Africa 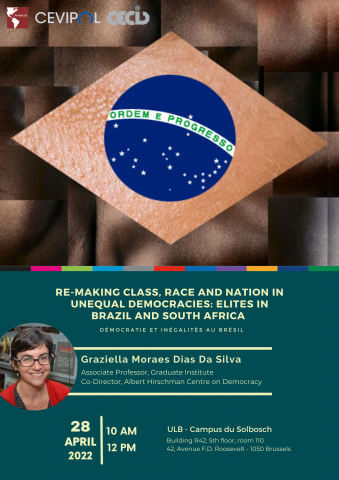 In the past decade,  the “South African miracle” and the “Brazilian promise” have given way to deep political crises and corruption scandals. Elites figure prominently in explanations for the current crisis in the two countries  but empirical research with elites in Brazil and South Africa has been limited and has generally focused on their attitudes toward democratic transitions.  Yet elite perceptions about the relationship between democratization, inequality, racialization, and redistribution remain largely underexplored. In the context of the growing concentration of economic and political resources globally, understanding elite interpretations (and misinterpretations) about redistribution may enable us to reframe the inequality debate in a more constructive direction, leading to more effective policy and political actions. In this presentation, I will build on past, recent and ongoing research I have conducted in Brazil and South Africa to discuss the possibilities of social change in unequal democracies.

PhD, Harvard University Graziella Moraes Silva joined the Anthropology and Sociology Department at the Graduate Institute in 2016. Between 2011 and 2016 she was at the Department of Sociology of the Federal University of Rio de Janeiro (UFRJ), Brazil and is still affiliated to the Graduate Program in Sociology and Anthropology (PPGSA) and to the Interdisciplinary Network for the Study of Inequality (NIED) at the same university. She is also affiliated to the Center for Social Development in Africa (CSDA) at the University of Johannesburg, South Africa.  Her current research focuses on comparative race relations and elite’s perceptions of poverty and inequality.  She is currently part of the Global Race Project as well as the PI in the FNS-funded project Elites in Unequal Democracies.
She is also one of the editors of the Journal of Latin American Studies, the Latin American and Caribbean Ethnic Studies and the International Development Policy.