A follow-up to “Against Acoustic Colonialism: Mapuche Interferences.”

In his presentation, Pr. Cárcamo-Huechante developed the idea of “acoustic colonialism”, that is, the concept of occupation of indigenous land by invasive bodies such as language, socio-sonic agents, media, and sonic infrastructure and technologies. 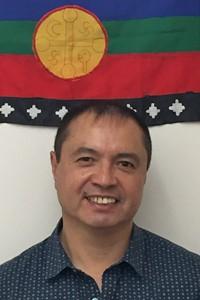 On March 24, 2022, the “Americas” research seminar held by the University of Lille had the pleasure of welcoming Professor Luis E. Cárcamo-Huechante from the University of Texas at Austin (Spanish & Portuguese Department) for a virtual presentation followed by a conversation with the scholars and students assembled for the event.

The event was made possible through the intermediary of Texas Global. Entitled “Against Acoustic Colonialism: Mapuche Interferences”, Pr. Cárcamo-Huechante’s presentation was a moving contribution to the seminar’s annual theme that was designed by CECILLE members Hélène Quanquin, Véronique Hébrard, and Aurore Clavier: “The Other Places of the Political in the Americas”.

In his presentation, Pr. Cárcamo-Huechante developed the idea of “acoustic colonialism”, that is, the concept of occupation of indigenous land by invasive bodies such as language, socio-sonic agents, media, and sonic infrastructure and technologies. To further illustrate this concept, he first analyzed an extract from a documentary by Jeanette Paillán, “El velo de Berta” (2005), which showed the construction of the Ralco hydroelectric dam in the Bío Bío region of Chile, at the beginning of the 21st century. In a juxtaposition of booming machine sounds and Mapuche voices, the extract illustrated the noisy arrival of destructive technology on indigenous lands and showed the attempt at resistance undertaken by the local population.

This attempt was one such “interference” that Professor Cárcamo-Huechante sought to explore in his talk. While the fight to stop the construction of the dam eventually failed, other interferences, notably by Mapuche artists, have reimposed indigenous soundscapes on some heavily urbanized environments. Some audio-visual “artivists” (a blend of “art” and “activist”) thus use manifold techniques to amplify the voices of the Mapuche Juan Currin community that had become surrounded by an urban development: Temuco.

Pr. Cárcamo-Huechante showed an extract from a performance entitled Lof Meu, in which the artists allegorize the struggle for voice within the Mapuche community. They retrieve a water spring (menoko) in the middle of the urban development, which acts as a visual and acoustic reminder of indigenous spaces that will continue to be. In the words of Professor Cárcamo-Huechante, “the video-making thus offers a remapping of the territory. The menoko is the audible path to territorial restitution, a synecdoche for the way that leads there.” Slowly, women’s voices are superimposed on the gentle lapping sounds of the stream. The voices acquire intensity as they spell out Mapuche names that they project upon the image and sound of the menoko, names that in the twentieth century would have often led to racist humiliations if pronounced in public. Therefore, “voicing Mapuche last names in a highly performative acoustic arrangement is a vindicative reimposition of Mapuche sounds upon a hostile sonic space.”

In exploring a wide spectrum of voices, sounds and noises, Pr Cárcamo-Huechante’s research is marked by the posture of “alkutun”, which in the Mapuche language signifies this exercise of attentive listening, of learning through actively engaging the ear, the eye, and the brain. This concern is a “methodological principle that invites us to sharpen our ears”, he argues, one that underlies his approach when identifying the sounds that are at the core of his book manuscript tentatively titled Mapuche Interferences: Acoustic Colonialism and Indigenous Responses.